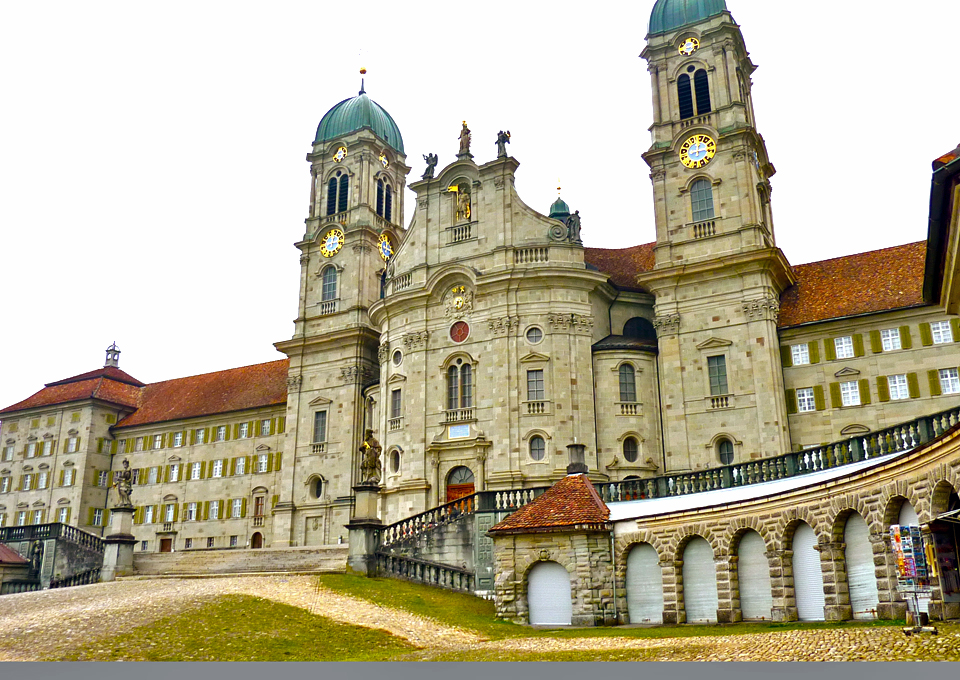 Einsiedeln – a Benedictine Abbey and a Marian Shrine

Located in a town on the foothills of the Alps not far from Zurich, the abbey is renowned for the famous black Madonna, its rich liturgical life and unique baroque architecture and art. The 55 monks teach at the Abbey School with about 350 students, serve in several parishes, and are available for the spiritual needs of the pilgrims. The history of the abbey dates back to 934, when a monastic community was founded at the place, where the hermit Saint Meinrad died as martyr in 861. The pilgrimage to Our Lady and her miraculously dedicated Chapel developed in the subsequent centuries and attracted people from all over Europe. The famous statue of Mary and her son Jesus in the chapel of Our Lady close to the main entrance of the abbey church was carved in the 15th century and is venerated by the pilgrims inside the Holy Chapel. In 1704, the cut of the spade for the current baroque buildings of the abbey was taken. The magnificent baroque abbey church was consecrated in 1735. Pilgrims from all over Europe came to Einsiedeln as one of the most popular marian shrines – long before Lourdes or Fatima. In 1798, the abbey was closed by French soldiers and the monks had to flee to Austria and Germany. They could return to their home only a few years later. Fortunately, they could save the miraculous statue in an adventurous journey through Switzerland, Italy and Austria. While the community was in exile, the soldiers destroyed the Chapel of Our Lady, which was rebuilt in a classicistic style in 1817. In 1854, some monks of Einsiedeln founded Saint Meinrad Archabbey in Indiana, U.S. From there other foundations of Benedictine communities in the United States were made. Pope Pius XII confirmed in 1947 the rights of the monastery as a territorial abbey, which means that the abbey is equal to a diocese. In 1948, when the number of monks of Einsiedeln reached more than 200, 12 of them were sent to found a new daughter house in Los Toldos, Argentina. In 1984, the community could welcome a famous visitor and pilgrim: Pope St. John Paul II., who consecrated the new main altar of the Abbey Church. Each year nearly one million people from all over the world visit the shrine of Our Lady of Einsiedeln as a destination of its own, as a part of a tour of Switzerland, or on their way to other pilgrimage sites like Rome, Lourdes or Fatima.