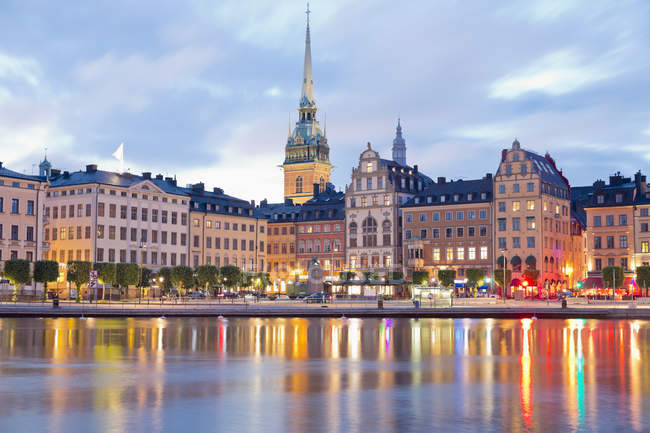 The German Church, or the Church of Saint Gertrude, was founded in 1571. it started as a Guild Lounge for german merchantmen in Stockholm who where a large part of the population in the 16th century. Hans Jakob Kristler enlarged the chapel in 1638-1642 to the present two-nave church. During the 17th century, while the choir of the school participated at the royal concerts, the church became an important centre for church music in Sweden. A crypt, construction on which was started in 1716 but was interrupted 1860-1992, is still in use by the parish. By 1800, the German congregation had dwindled to a mere 113 people, and in 1878 a fire destroyed the tower. The interior is Baroque in style, the large windows of which make it overflowed by light, highlighting the white vaults and their many angels heads. The wine cellars of the original guild building are still found under the current marble floor. In the atrium is a window featuring St. Gertrude herself holding a chalice in one hand and a model of the church in the other. The ten metres tall altar was created by Markus Hebel, a Baroque master from Neumünster, Schleswig-Holstein. The "king's gallery" crowned by the monogram of King Charles XI was designed by Nicodemus Tessin the Elder. The green and golden structure, at the time resting on pillars seemingly suspended over the floor, was reached by a magnificently carved flight of stairs used by generations of royal families, often of German descent, attending the sermons. The ceiling displays a painting by David Klöcker Ehrenstrahl, born in Hamburg and a member of the German parish. The lower part of the gallery was later glazed and today contains the sacristy. The painted windows are all from the turn of the century 1900. The southern windows, arguably, retell the benefits of living a devoted life. By the entrance is a commemorative plate reminding of the restaurateur Peter Hinrich Fuhrman (-1773), one of the church's most important donors. Today the German parish sorts under the Church of Sweden but as a so called non-territorial parish, the approximately 2,000 members of which are found all around Stockholm. Sermons in German are still held every Sunday at 11 am, and the church is open daily during summers and at weekends during winter. References: Wikipedia