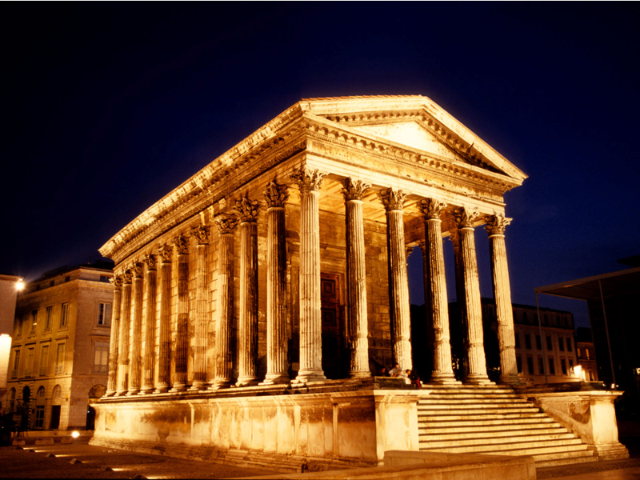 Maison Carèe is an ancient building in Nîmes and it is one of the best preserved Roman temple. The Maison Carrée inspired the neoclassical Église de la Madeleine in Paris, St. Marcellinus Church in Rogalin, Poland, and in the United States the Virginia State Capitol,which was designed by Thomas Jefferson, who had a stucco model made of the Maison Carrée while he was minister to France in 1785. The Maison Carrée is a classic example of Vitruvian architecture as it is nearly an exact replica of a Tuscan style Roman temple described in the writings of the famous architect Vitruvius. Raised on a 2.85 m high podium, and at 26.42 m by 13.54 m forming a rectangle almost twice as long as it is wide, the temple dominated the forum of the Roman city of Nîmes, in what is now southern France. The façade contains a deep portico or pronaos that is almost a third of the building's length and is richly decorated in terms of its columns and capitals. This deep porch emphasizes the temple front, and distinguishes the layout from ancient Greek temples. It is a hexastyle design with six Corinthian columns under the pediment at either end, and pseudoperipteral in that twenty engaged columns are embedded along the walls of the cella. Above the columns, the architrave is divided into three levels with ratios of 1:2:3. Egg-and-dart decoration divides the architrave from the frieze. On three sides the frieze is decorated with fine ornamental relief carvings of rosettes and acanthus leaves beneath a row of very fine dentils. However, the refinement of the decorative carvings on the building is not nearly as precise and mathematically perfect as the decoration on the Parthenon or other Greek temples. A large door (6.87 m high by 3.27 m wide) leads to the surprisingly small and windowless interior, where the shrine was originally housed. This is now used to house a tourist oriented film on the Roman history of Nîmes. No ancient decoration remains inside the cella.