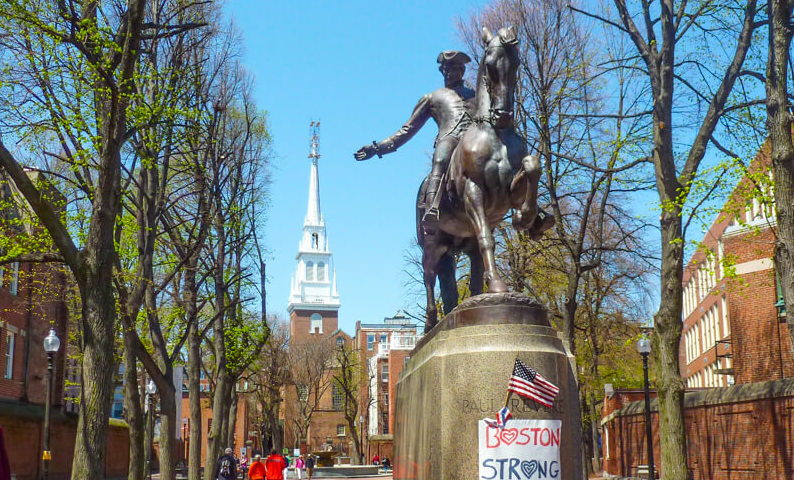 Christ Church, long known as "Old North," has deep roots in Boston’s North End. Though it is remembered today as a symbol of patriot defiance, the story of Old North is a reflection of the deepening divisions between "Friends of the Government" and "Sons of Liberty" in Revolutionary Boston. Built in 1723, Old North was an Anglican, or official church of England, rather than a Congregational, or Puritan, church. Although the Charter of 1692 required greater religious tolerance in Massachusetts, many Bostonians still feared the influence of the official Church of England. Nonetheless, many wealthy merchants, government officials, and skilled tradesmen were drawn to "Old North." The stained glass windows, expensive pews, and Georgian architecture represented a stunning contrast to the simplicity of Congregational churches like Old South Meeting House. Despite being an Anglican church, "Old North" was different from other Church of England parishes in New England. While many Anglican churches were seen as "tory" or "loyalist" congregations, Christ Church was split. Political and financial disputes so plagued the church that on April 18, 1775, the church's minister and vocal loyalist Rev. Mather Byles Jr. resigned. That same night, the church's sexton, Robert Newman, and a vestryman (lay-leader) of the church, John Pulling, entered the sancutary to aid the patriot cause. According to an account by Paul Revere, on the night of April 18, 1775, he "called upon a friend, and desired him to make the Signals." That friend was John Pulling, and Pulling, with the assistance of Robert Newman, secretly fulfilled Revere's request. The signal was arranged just days before: One lantern if British regular troops march out of Boston by land, two if they depart by boats across the river. Revere himself was not waiting for this signal. He arranged the signal because it would be the fastest and most reliable means to send warning outside Boston. After conferring with Pulling, Revere still had to stop by his home, get on a boat, and be carefully rowed to Charlestown past a British warship. There were many opportunities where Revere could have been detained or arrested before even getting on horseback. After the lanterns briefly hung, Pulling fled Boston to evade arrest. Newman, who lived with his mother, had British soldiers as boarders in his home. Newman had to climb through his bedroom window to avoid detection. The next day, Newman was arrested and questioned but was ultimately released. By the end of that same day, April 19, 1775 a running battle had unfolded along twenty miles of Massachusetts countryside. Thanks in part to the signals atop Christ Church, the Revolutionary War had begun.