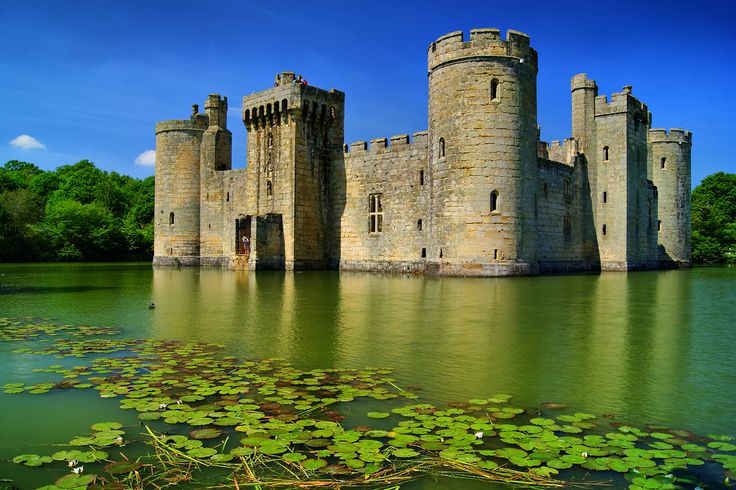 Originally built in 1385, Bodiam Castle has spent centuries as one of the best loved and best known castles in England. Perhaps it is the design of the building, with an iconic moat and beautiful lush green scenery, or simply the amazing history of the building, which makes it so popular? The castle was built by Sir Edward Dalyngrigge, who is known to have once been a knight of Edward III. With his knowledge of battles, he designed the castle with the intention of defending the beautiful area of Easts Sussex, from a possible invasion by the French, during The Hundred Years Wars. Sir Edward Dalyngrigge was the youngest son within his family and this meant that he was the last in line to inherit anything from the estate. However, he married into a family that owned land, and it was during 1378 that he found himself owning the manor of Bodiam. During is knighthood, which spanned from 1379 to 1388 he found himself with enough money to build himself a home, which was the beginnings of Bodiam Castle. Not only was Bodiam Castle built to protect its inhabitants, but it was also made to be an inviting home too. The design of the castle is something that still intrigues people in this modern time. It is a quadrangular design and features chambers on the outer walls as well as towers on each of the entrance points and the corners. These towers were important as lookouts for any potential attacks that would require a quick response. It also features inner courts, which allowed for space for those living and working within the castle. One of the most attractive parts of the castle had to be the moat, however, whilst this moat looked beautiful, it acted as a sewage system for some 30 different toilets that were found throughout the castle, perhaps not smelling as great as it looked!